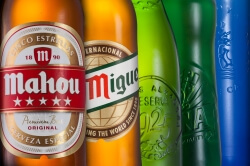 Madrid, 21 May 2015. Mahou San Miguel, Spain's leading brewer, achieved an operating profit of 168 million euros in 2014, up 1.8% on the previous year, and a turnover of 1.153 billion euros, an increase of 3%. Mahou San Miguel's total production volume exceeded 15 million hectolitres, 13 million of which correspond to beer and 2 million to water and soft drinks, an increase of 1.7% compared with the previous year.

The positive results in 2014 were driven by the growth registered by all lines of business: Domestic grew by 1.5%, International by 12% and Water and Soft Drinks by 10.6%.

Alberto Rodríguez–Toquero, Managing Director of Mahou San Miguel, asserted during the results presentation that "the figures for 2014 represent for us a confirmation that our strategy to revitalise the brewing business and the experience surrounding the consumption of our products is bearing fruit. We are likewise proud of the fact that they demonstrate the huge capacity of our professionals to engage with our customers, both at home and abroad, proposing innovative formulas that contribute value for all. A long-term vision guides our decisions at a point when Mahou San Miguel is furthermore celebrating its 125th birthday, a sign of that permanent commitment to the generation of value".

At the Domestic Business Unit, which accounts for 87% of the total, the brewer focused on value creation and the promotion of beer culture and experience, serving to consolidate its leading position in the sector in Spain, with a production share of 35.5%. In this regard, Mahou San Miguel invested 34 million euros in initiatives dedicated to the revitalisation of the on trade, up 37% on 2013.

The Water and Soft Drinks Business registered very significant growth in the On-trade channel, where the Premium positioning of Solán de Cabras gives it standout value within the sector. It likewise grew faster than the market rate in the Off-trade channel. Meanwhile, the dynamism of Solán de Cabras and the recognition of its quality and purity at the international level served to increase sales abroad by 30%.

In 2014 the International Business underpinned its growth by increasing sales by some 12% compared with the previous year, now accounting for 14% of Mahou San Miguel's overall volume. The key milestones in this field include the acquisition of 100% of Arian Breweries & Distilleries in India, leading to the creation of Mahou San Miguel's first subsidiary outside Spain: Mahou India. In addition to its own local brand, Dare Devil, it has now begun marketing the company's flagship product in the country: Mahou Cinco Estrellas. This serves to extend its offering in India and break into the Premium category, competing in new segments.

The company likewise acquired a 30% stake in the American craft brewer Founders, thereby making inroads into one of the most valuable segments of the US market, with growth levels of 20% per year. The Spanish group views this operation as a source of learning and experiences to be transferred likewise to other markets. In 2014 it also purchased 33.5% of the Chilean distributor Magia Products, in order to launch future expansions in other Latin American markets from Chile.

Last year the company likewise signed an agreement with San Miguel Brewing International, the largest brewer in the Philippines and Southeast Asia, to promote its international businesses and position San Miguel jointly as a global and iconic worldwide brand.

Mahou San Miguel now has a presence in more than 60 countries and produces 75% of the Spanish beer consumed worldwide.

Commitment to the economy, development and employment

Once again last year Mahou San Miguel's operations were closely linked to the generation of wealth and sustainable development. Through its activity in 2014 the company contributed to economic development in the country to the tune of 1.301 billion euros distributed to professional staff (204 million), companies (790 million) and the public administration (307 million).

With an investment level of 66 million, the company continued its long-term commitment and efforts to ensure it has in place cutting-edge facilities, promoting R&D+i and enhancing occupational and environmental safety at its seven brewing sites in Spain and its two water bottling plants. Overall, 24 million euros were allocated to the improvement of its industrial assets.

The promotion of art, culture and sport in Spain remains an unfaltering commitment of the company, to which it dedicated 25 million euros in 2014. Another milestone last year was the purchase of the Palacio Duque del Infantado in Madrid, which will become Mahou's future centre for beer culture and leisure.

In 2014, Mahou San Miguel was one of the biggest corporate job creators in Spain, despite the challenging economic climate. A total of 117 hirings consolidated the brewer's team of 2,700 professionals, who received over 50,000 hours of training, with an investment of close on a million euros. The brewer likewise promoted youth employment through such innovative development programmes in this sphere as "Crecemos".

In its first full year in operation, the Mahou San Miguel Foundation dedicated its efforts to nine programmes in the field of social and occupational integration and ethical education, through its own programmes and those organised by third parties. The Foundation benefited people at risk of exclusion through programmes to provide job opportunities through training.

2015 represents a key date for the company, marking the 125th anniversary of the founding of Hijos de Casimiro Mahou and its first brewery in 1890.

Through the slogan "125 more years together", Mahou San Miguel aims to pay tribute to the efforts and experience of the seven generations of professionals who have made it the leading company in its sector. Its history has mirrored the country's growth, contributing to the advancement of its economy, to sustainable development, to industrial innovation, to promotion of the Spain Brand and the fostering of a beer culture.