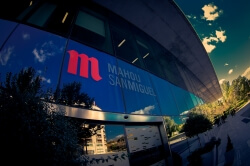 Madrid, 28 April 2014. Mahou San Miguel, Spain's leading brewer, has established its first international subsidiary in India through the acquisition of 100% of Arian Breweries & Distilleries Ltd., a firm owned by a local family group in which it already held a 50% stake through a joint venture agreement reached in 2012.

"These have been two very exciting years during which together with our partners we have learned a great deal about the Indian market and consumers," declares Alberto Rodríguez-Toquero, Managing Director of Mahou San Miguel. "We now have the knowledge and experience to take a further step and assume full control of the development of our business in India. Overseas operations will be our main growth lever over the coming years," he adds.

This acquisition represents a step change in the internationalisation strategy of Mahou San Miguel, which set up its International Business Unit headed by Jonathan Stordy in 2012 with the aim of driving forward an area which over the last five years has seen its proportion of the company's overall sales double.

A project for the future

Mahou San Miguel has more than 60 professionals in place in India, along with a brewer located in Bhiwadi (Rajasthan State) covering 64,125 square metres, with an output capacity of 250,000 hectolitres per year. It today has a presence in five states around the country through its local Brand Dare Devil. Flagship Brand Mahou and Andalucian Craft beer Alhambra Reserva 1925 will shortly be added to the company´s portfolio in India

Through its new subsidiary the brewer will continue to invest to satisfy the needs of the Indian market; innovating and contributing new value to consumers through its brewing expertise, a committed team, cutting-edge facilities and continuous improvement in quality as cornerstones of its approach.

In order to lead this key initiative Erik D'Auchamp, previously the company's Director of International Marketing, will be based in Delhi as the new Managing Director of Arian Breweries & Distilleries Ltd, following on from the excellent leadership over the past two years by his predecessor in the post, Francisco Ayuga, who will now enjoy his retirement after a long and successful career at Mahou San Miguel. The appointment of Erik D’Auchamp is in part a result of the "Career Development Programme" at Mahou San Miguel, through which the company continues to invest in the growth of its professionals.

Per capita consumption of beer in India is currently among the lowest in the world (1.5 litres per year), although as a whole the market is already half the size of the beer market in Spain, where consumption stands at 47.5 litres per capita. With a young and growing population of some 1.2 billion, expectations for growth of the Indian breweries sector are particularly positive, with expansion of 11% per annum expected over the next three years.