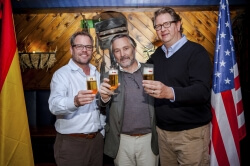 Madrid, 17 December 2014. Mahou San Miguel, a 100% Spanish-owned family company and the sector leader in the country has taken a further step in its international strategy through the signature of an agreement to invest in Founders, one of the fastest-growing brewers in the craft segment in the United States. Through this operation Mahou San Miguel has acquired a 30% stake in the American company, which will allow the firms together to lead innovation in brewing trends worldwide.

Founders Brewing Co. was established in 1997 in Grand Rapids, Michigan, by a group of entrepreneurs who currently sell their beer in 32 states. Its deep portfolio stands out for its quality, variety and originality: innovative beers with a wide range of flavours, from the bitterness of hops to the sweetness of raspberry and the richness of chocolate and coffee. In fact, this American brewery has received prestigious international awards in recognition of the quality and taste of its products, such as the recent gold medal from Brussels Beer Challenge and more than 10 awards from the World Beer Cup and the Great American Beer Festival. In addition, RateBeer and BeerAdvocate users often rate its beers among the best in the world.

The partnership will help Founders grow through Mahou’s international distribution network to access the emerging craft beer community around the world. Founders and Mahou are focused on long-term strategic growth, with a commitment to brand longevity and product quality.

The agreement was made possible by the fact that Mahou San Miguel and Founders share a passion for their products and brewing tradition, and have very similar corporate principles and values.

"We see our investment in Founders as a great source of learning, innovation and transformation for Mahou San Miguel in the hugely attractive and innovative market that USA represents, which is indeed the beer market of more value worldwide. A market which sets consumer trends, with huge prospects for growth to which our company and our brands have much to contribute," asserts Javier López del Hierro, President of Mahou San Miguel. "Founders is using its know-how, which combines product and commercial excellence, to stand out in the high-value beer segment which now represents 15% of overall sales in the USA, growing by 20% per year".

For his part Mike Stevens, co-founder and CEO of Founders, asserted that "first of all, we knew that taking on a partner was the necessary, responsible thing to do for the future of Founders because it would afford us new opportunities for growth as well as ensure our legacy for years to come. We spent a long time determining who would be the best partner to help us grow Founders while staying true to our beers and our culture. Mahou shares our family values, a commitment to their communities and the importance of long-term partnerships. We are honored to be entering into a partnership with a brewer that commands so much respect and with such a focus on brewing excellence.”

The operation, subject to final approval by the US authorities, corresponds to Mahou San Miguel's desire to continue exploring international opportunities in collaboration with partners who can demonstrate knowledge of local consumers and markets and the utmost guarantees in terms of product quality.

Mahou San Miguel has had a presence on the US market since 2011, and its Mahou Cinco Estrellas and Alhambra Reserva 1925 brands have achieved increasing visibility and penetration focused in Florida.

Mahou San Miguel sells its beer in more than 50 countries on five continents and produces directly in a number of them. A wide international footprint at markets such as UK, Germany, Italy, Nordic countries, USA, Chile, Guinea, Cameroun, China, India, allows the company to account for a variety in consumer trends and growing segments tremendously complementary for its strategy. The international sales represent today a 13% of Mahou San Miguel overall business, with the aim of reaching a 20% in the medium term. The establishment of its first 100% owned subsidiary outside Spain, in India, and the agreement with San Miguel Brewing International to position San Miguel as an iconic brand around the world marked two clear milestones in 2014 in order to achieve the company's international goals, alongside this acquisition of 30% of Founders, operation in which the Spanish brewer has been advised by investment bank Nomura and the law firm Hogan Lovells.

Founders was established in 1997 by two beer enthusiasts, David Engbers and Mike Stevens, who one day decided to follow their dream and set up a new enterprise. Together they created the company which today produces beers of great personality, full of flavour and intense taste. Founders is currently one of the top 30 most significant craft brewers in the United States, and one of the fastest-growing. It is based in Grand Rapids, Michigan, where it has become a regional icon, employing a professional workforce of 262. It currently has a presence in 32 states and 12 countries with an outstanding portfolio of ales that have received prestigious awards in recognition of their quality and flavour. For further information, visit www.foundersbrewing.com.