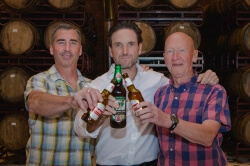 Madrid, 28 November, 2017.-  Mahou San Miguel has taken another step in its internationalisation strategy and its positioning as the driving Spanish brewer behind the craft sector, with the signing of an agreement to acquire shares in Avery Brewing, one of the artisan beers with the greatest recent growth in the United States and a high potential for development. Through this transaction, it acquires 30% of the North American company whose products are distributed in 33 states, among which are highly competitive markets such as Colorado, California or Texas.

Founded in 1993 in Boulder, Colorado, this brewery is the product of the entrepreneurial spirit of Adam Avery, who at the time had only just turned 27 years of age. A keen home brewing enthusiast, he was at a stage in his life when he was unsure about the professional path to follow. His dream ultimately became a reality thanks to the support of his father, Larry, who put his retirement money into setting up this craft brewery, a real regional "gem" with a product portfolio combining quality, innovation and creativity, spearheaded by its most emblematic brand: White Rascal. Standing out, above others, are its Belgian type beer, its IPAs and its range of bitter and barrel-aged beers, a national benchmark brand in the United States within this segment. Its high quality products have been awarded 12 medals in the prestigious Great American Beer Festival and have positioned it as one of the main brewers in the US Craft segment.

Through this agreement, both companies aim on promoting the organic growth of Avery Brewing investing in innovation and quality, which will enable it to reinforce its presence in current US markets and reach new ones, even beyond its borders.

“This new alliance, between two family companies, has been possible thanks to the passion we share for beer and tradition and that we have similar values. We share the commitment with the communities in which we are present, our long-term vision, concern for the sustainability and well-being of individuals and our aim of doing things right, placing the consumer always at the centre of our decisions. This operation strengthens us as the driving Spanish brewer behind the craft sector and will reinforce our positioning in the United States”. -states Eduardo Petrossi, CEO, Mahou San Miguel.

“Dad and I decided two years ago that in order to fulfil our vision of the new brewery and all of Avery Brewing’s potential, it made a lot of sense to seek a partner”- says Adam Avery, founder of Avery Brewing- “At that time, we established our criteria for our perfect partner: Minority Investor, Privately Held and Family Owned Entity, Long-term Investment, Strategic Advantages, and Good People with Shared Values.  Mahou San Miguel emphatically checked all of those boxes for us and is our ideal partner for continued growth, remaining faithful to our beers and our culture.  It is with great satisfaction that we stand side by side such a respected family company with a dedicated focus on brewing and the future.”

First Beverage Group acted as the exclusive financial advisor to Avery Brewing in the transaction, which is subject to approval by North American authorities.

The agreement also fits within Mahou San Miguel’s vision to continue exploring international opportunities along with partners who provide their knowledge of local consumers and markets and offer the finest assurances, both in product quality and distribution.

Mahou San Miguel strengthens its market position in the USA

The Company, leader in the Spanish brewing industry, has been present in the US market since 2011, where its brands Mahou Cinco Estrellas and Alhambra Reserva 1925 enjoy a growing visibility and penetration, particularly in Florida. In 2014, it signed an agreement with the Craft brewer Founders Brewing, located in Grand Rapids, Michigan, in which it acquired a 30% share. Thus, it became a pioneer in Spain, by carrying out a transaction that enabled it to enter into one of the most dynamic and innovative markets in the world.

Mahou San Miguel produces over 70% of the Spanish beer consumed world-wide, and is present in 70 countries, with its main markets being United Kingdom, Equatorial Guinea, Italy, Germany, Portugal, India and the Nordic countries. In 2016 alone, its beer sales beyond its borders reached 2 million hectolitres and represented 15% of the total volume.