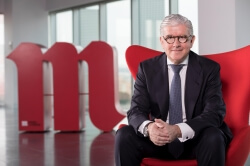 Madrid, 3 May 2018.  Mahou San Miguel, a 100% Spanish-owned family company, consolidated its leadership of the beer sector in the country in 2017, signing off the year with a record sales figure. Volumes increased by 3.1% compared with the previous financial year, standing at 16.6 million hectolitres, of which 13.8 corresponded to beer and 2.8 to mineral water and mineral water and fruit juice-based drinks. Meanwhile, turnover rose for the fourth year running to a figure of 1.2622 million euros, up 3.4%. This allowed the company once again to beat its historical earnings record, driven by innovation and the focus on shifting towards premium brands to spearhead its development of the category.

Meanwhile, EBITDA stood at 257.5 million euros, 2.7% less than the previous year, while operating profits were 4.1% lower than in 2017. This downturn is the result of the brewer's decision to increase its investments so as to continue driving future growth. Investments, then, rose by 13.1%, up to a figure 88 million euros, dedicated above all to innovation in products and processes, brand development, logistics optimisation projects, the introduction of technological improvements at its facilities to guarantee sustainability, and support for its clients. In 2017 alone it dedicated 69.1 million euros to promoting the on-trade segment, 16.1% more than the previous financial year.

Alberto Rodríguez-Toquero, Managing Director of Mahou San Miguel, emphasised today at the presentation of the company's results that "2017 was a year of momentum, confirming that the company has been taking the right decisions. We signed of a record year, in which we grew and bedded in the foundations to address future challenges with success and confidence, through a project that fills us with enthusiasm and in which we will continue investing so as to remain sector leaders, through innovation, category transformation and the sustainable development of our business".

Momentum in innovation and premium brands

The company's good results are to a great extent driven by innovation, an essential cornerstone for growth and to remain the prime mover in developing the beer sector, creating the greatest value for the sector in Spain. Mahou San Miguel invested more than 20.8 million euros in 2017 in what is element that cuts across all business areas, 21.6% more than in the previous year. This resulted in a 6% increase in the volume of sales through innovation, and a 60% increase in the value coming directly from new product launches over the last five years. This figure accounts for 3.8% of the company's total net sales, as opposed to 2.2% in 2016.

One clear example of this spirit of innovation was the launch of the Barrel Cellar at the Alovera Production Centre, the only facility of its kind in Spain, in which we invested 2.8 million euros last year, serving to create a new beer category in the country. Meanwhile, four new products were brought to market, Mahou Barrica Bourbon, Mahou 0,0 Tostada, San Miguel Manila and Alhambra Especial Sin, while also developing new consumption moments, forms and experiences, with the focus on the Premium segment.

Spain's most advanced brewer in the craft world

Mahou San Miguel is aware of the growing consumer interest in craft beers, which ties in perfectly with its philosophy of innovation and product quality. Which is why last November it took a further step in its strategy of internationalisation and positioning as the most advanced Spanish brewer in promoting the craft beer world, by acquiring a 40% stake in Avery Brewing, a US craft brewer with great potential for growth.

The deal goes hand-in-hand with other craft operations, such as Founders in the US and Nómada Brewing in Spain, along with such local brewers as La Salve in Bilbao, providing the company with a strong position for development in one of the most dynamic and innovative segments in the world.

Creating value wherever it has a presence

Last year it allocated more than 35 million euros to promoting culture and sport, and invested close on 2.1 million euros in Corporate Responsibility initiatives and the activities of its Foundation. In specific terms, it promoted more than 3,401 hours of corporate volunteering, involving more than 400 staff and their families. Meanwhile, the Mahou San Miguel Foundation worked on various programmes, including in particular the third edition of "Creating Opportunities in the on-trade sector", a training initiative to generate employment in the on-trade sector intended for young people at risk of social exclusion and people with learning disabilities. Following completion of the programme, more than 94% of the 147 participants found a job opportunity.

These initiatives are further backed up by the launch of the "We Are 2020" Strategic Sustainability Framework, a three-year plan through which the brewer aims to be a key active player in this sphere in the Major Retail sector, to which it will dedicate more than 30 million euros.

2017 was likewise a key year for Mahou San Miguel in the definition of its new Strategic Plan looking ahead to 2020, showing its shareholders' firm commitment to the sustainable development of the business and the company's long-term ambitions. A new route map placing consumers and people at the heart of the business, which will serve to evolve the company in the long term through the strategic strands of Sustainability, Innovation, Digitisation and Excellence. It will also to this end adapt its organisational model by transforming skills and the working culture so as to foster cross-functionality, talent and diversity within its teams.