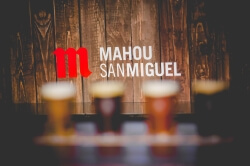 Madrid, 27th February 2018.- Mahou San Miguel, a leader in the Spanish beer industry, will invest €11 million in the creation of the first Brewhub in Spain, a collaborative space where different domestic and international craft breweries will be able to share ideas and develop their beers, mainly for sale in the European market. Promoted by Cervecera Independiente, within the Mahou San Miguel New Business Unit, it will be located next to the company's Production Centre in Córdoba and will start operations in 2019, with plans for gradual expansion over the next six years.

In undertaking this innovative project, Mahou San Miguel consolidates its position as the most advanced Spanish brewery in the promotion of the craft beer world, a commitment that has been demonstrated by its pioneering collaborations with the North American craft brewers Founders Brewing and Avery Brewing, and with the Spanish Nómada Brewing, for the development of numerous initiatives aimed at elevating the category.

“The craft movement is a clear example of collaboration and the spirit of innovation, two values that govern our daily activity at Mahou San Miguel. As industry leaders, our mission is to continue promoting creativity and the beer culture in our country, therefore we have listened to the craft segment, one of the ones adding the greatest value to the domestic and international beer scene", stated Benet Fité, the Managing Director of Mahou San Miguel's New Business Unit.

A unique open and collaborative space in Spain

The project was conceived on the needs of craft brewers and, accordingly, Mahou San Miguel has worked hand-in-hand with Javier Aldea, the founder of Nómada Brewing. Thus, the new Brewhub will be a space open to all nomadic beer makers that do not have their own plant and are in the search of growth but with limited facilities, a very typical situation in the craft sector that comes on top of the inherent complexity of working with an artisanal product, an extremely delicate one that complicates the logistical flows and, consequently, the export capacity. This centre will offer craft brands a higher level of control and quality assurance, as well as greater stability to their beers.

Capacity to produce a wide variety of styles and formats

The Mahou San Miguel Brewhub is being created with the vocation of becoming a reference centre for new beer makers, not only domestically but also internationally. Its facilities will be designed specifically to produce a wide variety of styles and batches of any size, and it will have cutting-edge technology for customising the product on the premises, thereby covering the entire development process, from the conception of the new liquids to the design of packaging and labelling.

Similarly, it will have multi-option packaging lines that will offer a wide variety of formats, such as the iconic bottle, the keg or the can, used by craft manufacturers.

Additionally, the project will include all the facilities needed for adapting to new beer trends, including oxidative ageing, cold storage of unpasteurised products, and lager, ale, hybrid or mixed fermentations.